Bruno is a perfect example! 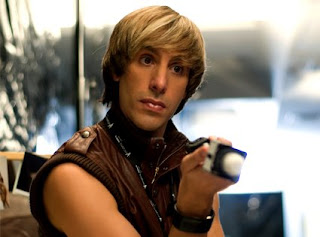 So just yesterday I talked about the power of twitter and other social media tools when it comes to movie box offices. Well, the latest weekend box office figures are in and it perfectly exemplifies what I was talking about.

Bruno had an aggressive marketing campaign starting months ago. It used traditional marketing like trailers and tv spots, but also used Sascha Baron Cohen in a way that only he can do – late night guest spots in full character to stir up controversy and media coverage. He even staged that bit at the MTV Movie Awards where he falls ass first onto Eminem. It was smart marketing and got everyone talking about the film. But marketing only gets you to your opening weekend, and now just to opening day.
Bruno opened to a really strong $14.4 million on Friday, and the industry all thought this would lead to a huge opening weekend nearing $40 million. However, the intake for Saturday had a huge drop off! Word of mouth undid all those millions spent on marketing.
Twitter/Facebook have spoken and they did not find Bruno funny, it was too offensive, and not really satirizing as much as making Bruno the joke and laughing at gays. At least, that’s what some people feel.
Here are a couple lackluster responses, just from doing a quick twitter search:

While these aren’t scathing reviews, they’re not exactly encouraging you to go out and spend $12 to see it.
This weekend’s box office does not bode well for Bruno. There’s no guarantee it will fail, there are many a number of unforeseen reasons Saturday and Sunday’s numbers could have been so low compared to Friday’s strong start. But all signs are pointing to Bruno dropping out of theaters faster than originally planned. It will still be profitable, it just doesn’t seem to have the legs to be a box office smash hit like Borat was. If the decline keeps going at this rate, I’ll be surprised if it makes over $150 million.
(original box office numbers and photo can be found here.)
Tags:box officesocial media
Previous post

The Impact of Social Media on Movies

TIME agrees with me

Bruno is a perfect example!