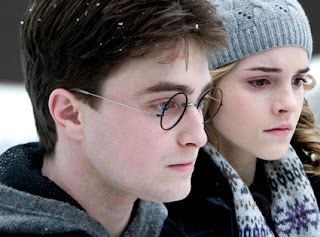 (I’ll be updating this post as the figures come in)

Midnight figures just came in and Harry Potter and the Half Blood Prince made $22.2 million dollars in one night! It beat out The Dark Night’s old record by roughly $4 million! If the film can keep up this pace through the weekend, I have no doubt it’ll beat out Transformers 2 and The Dark Knight to become the king of the domestic box office.

Photo and figures from E! Online

Nielson just released a handy chart to compare all the HP and Twilight media! Check it out here!

Looks like HP juuuust missed breaking Transformers 2 opening-day record. Ticket sales slowed in the evening, in comparison to the midnight screenings. Seems like many HP fans that waited the 6 months since Warner Bros pushed back the release from November to July didn’t want to wait any longer than they had to. This puts weekend estimates at just under $200 million. I’m still hoping for a turnaround once the weekend hits, but it seems unlikely. At least Harry Potter should have better legs than Transformers 2, since fans will likely see the film again, or wait to see it, in IMAX or IMAX 3D.

Update: 7/17 11:30pm
Thursday: HP6 made another $22 million on Thursday. This brings its 2-day total to $80 million! While it could be better, that is still pretty damn good. My new estimation – $180 million through Sunday. I’d prefer my first estimation to be true, but it doesn’t look like this film has the momentum the hype and midnight showings suggested.
Update: 7/19 10pm
Weekend: Overall 5 day total for Harry Potter 6 made just over $159 million! While that in itself is considered a huge success, it definitely did not live up to the expected weekend gross after the huge buzz and record-breaking midnight take. When it broke The Dark Knight record, it showed all the promise of breaking the Transformers 2 5 day take. But, it turned out that it was just the hardcore fans who couldn’t wait any longer after than they already had from the 8 month WB delay.
It’s an impressive haul, and in line with Order of the Phoenix. It seems like it hasn’t gained many new fans since the last movie, but when you have such broad international appeal, it’s hard to get any bigger. To bring this back to a previous topic, it’ll be interesting to see Twilight’s opening in November. I’m sure it’s going to be bigger than first one, since more people have read the books because of the success of the first movie. Now it will have all the rabid fan girls who see the movie 5 times in one weekend, as well as the new fans.

“Harry Potter and the Half-Blood Prince conjured a record-breaking $396.7 million in global box office over its five-day opening weekend, according to a Reuters report. That figure — including $159.7 million in the U.S. and a whopping $237 million in international gross across 84 markets — tops Spider-Man 3‘s worldwide opening record of $381.7 million, set in 2007.” (via Entertainment Weekly)

HP is truly a global phenomenon! This is where it leaves Twilight in the dust. 🙂

Motion Posters: The Next Norm in Movie Marketing

My Top 5 Most Anticipated Summer 2011 Blockbusters