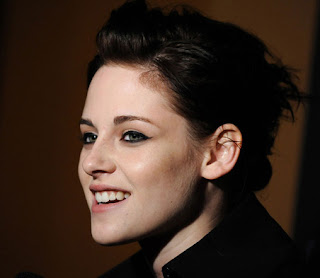 Kristen Stewart is currently in negotiations to star in Snow White and the Huntsman opposite Viggo Mortensen and Charlize Theron for Universal. Looks like this was the reason she dropped out of Lois Lane casting.

Nothing is official, so things could still fall apart, but both sides want it to happen.
THR reports that Stewart has been in consideration by Universal since they acquired the project. The project has already held screen tests with actresses such as Riley Keough, Felicity Jones and Alicia Vikander. As we reported, Stewart was still in consideration last week and Universal offered her the part over the weekend.
Rupert Sanders is making the jump from directing commercials to help this pic. The film will increase the action levels the fairy tale and focuses heavily on the relationship between White and the Huntsman. This new scenario has Snow White banished and on the run by the evil queen (Theron), the Huntsman (Mortensen) takes her under his wing to protect her, and she becomes his protege, learning how to fight and defend herself.
I may be the only one who is a fan of Kristen Stewart. I really liked her in Adventureland and mildly enjoy the Twilight series. These kind of offers are going to keep coming since Stewart is able to pack fans into the theaters.
I say give her a chance, and don’t judge her on her performance in a franchise that has not given her a lot of dimension to work with. Even the best actors can’t work their way out of crappy script. I am seriously looking forward to this movie.
What are your thoughts on this news?
Tags:Viggo Mortensen
Previous post