Could Two Face return for THE DARK KNIGHT RISES? 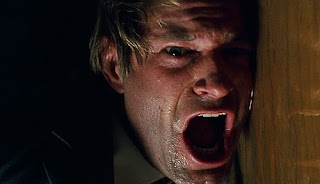 Most people, after some online speculation upon its release, have grown to accept that Harvey Dent died at the end of The Dark Knight and, therefore, we won’t be seeing any more of Two Face in Nolan’s Batman franchise.

However, Aaron Eckhart, who has always stated that the character did in fact die at the end of the movie and wouldn’t be returning, hinted otherwise in an interview with CBS News.

When the reporter mentioned Harvey Dent in the Batman movies, Eckhart said: “I’m not?”

He also went on, contrasting with his previous answers to such a question, to say that he “couldn’t possibly say” whether Two Face would appear in THE DARK KNIGHT RISES with a sly smile on his face.

Do you think he could return? In what way? Is this something you’re looking forward to?

See the aforementioned interview below.

The Many Looks of Christian Bale

Could Two Face return for THE DARK KNIGHT RISES?