Arnold is back again as THE TERMINATOR 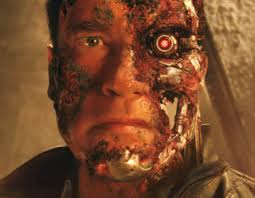 “I’ll Be Back“. Arnold wasn’t joking around when he coined that now famous catch phrase. Mr. Schwarzenegger, looking for some post-governor of California work, has accepted a small position…back in Hollywood. He will return to the big screen in the next TERMINATOR film. I forsee numerous mixed reactions by this announcement. Me myself am very curious to see what direction is taken with the former Mr. Olympia once again playing a murderous robot from the future.

Justin Lin, who directed FAST FIVE, is reported to be in the running to lend his talent to this project. Especially if the deal falls into the lap of Universal. Sony as well as Lionsgate are both taking a good look at the rights package which was released to a number of studios.  I personally appreciated the path that was taken with TERMINATOR SALVATION, which was disliked by many. But with Arnold back in the flesh, not just some top-notch CGI, maybe the franchise will veer onto a completely different route.

What do you think about the Governator’s return to film?

It's here - The first official trailer for Harry Potter And The Deathly Hallows: Part 2

Arnold is back again as THE TERMINATOR