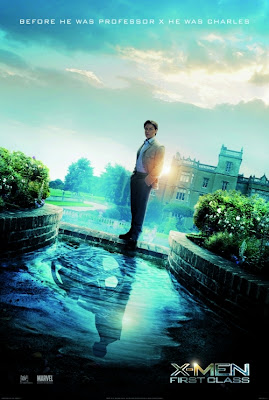 The 60’s set X-MEN: FIRST CLASS has not focused on the fact that it’s technically a period piece. Looking at the posters and trailers, they’ve followed closely along what has been set forth in the previous, contemporary-set X-MEN films. Some fans have taken it upon themselves to create materials that reflect the look of the 1960’s and this fan-made trailer is my favorite of the bunch.

Watch the slick credits and find out more about the creator after the break.

Set during the midst of the Cuba Missile Crisis, X-Men: First Class tells the story of the first team coming together, before they would become the heroes and villains we know from the original X-Men Trilogy.

This sequence was designed to give a very brief primer on the time period, the setting, as well as show the relationships of the characters in this film, as they are very different from the previous movies and audiences shouldn’t be confused as to why Professor X and Magneto, enemies in the original trilogy, are the best of friends in this prequel.

X-MEN: FIRST CLASS is one of my most anticipated flicks in a very packed summer movie season. X2 remains one of my favorite superhero flicks, so hopefully this can live up to the first two X-MEN films instead of the disappointing X3.

Are you looking forward to it? If not, what’s your most anticipated summer release? There’s so many to choose from!

EXCLUSIVE: Icon confirm they'll release THE TREE OF LIFE on May 4th in the UK, BEFORE the Cannes premiere!