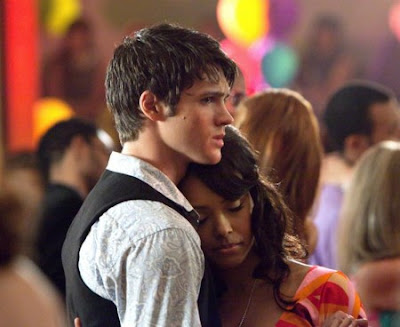 Last week on The Vampire Diaries, sooo much double-crossing happened and it ended with Isabelle dead, Alaric posessed by Klaus, and Bonnie with all the dead witches’ power.

Klaus doesn’t want Elijah alive any more than any of the others. Katherine’s being held captive and he’s using her to get information on what the Salvatores have been up to and to make sure he’ll be a passable Alaric.

“I’ve searched for you for the past 500 years. Your death is going to last at least half that long.”

After that chilling line, he compelled Katherine to stab herself repeated until he returned. So begins her 250+ years of pain.

Elena is now the sole owner of the Salvatore manor, and after toying with Damon a bit, the only vampires that are allowed in are her two favorite brothers. She’s got her new safe house, too bad she won’t stay in it! She insists on going to school and the 60’s Decade Dance of course.

In the cafeteria, Jeremy’s upset that Bonnie is pretty much committing suicide for Elena. He promised to keep it secret that using all that power could kill her, but he’s definitely looking to talk her out of it. But the big news is that Elena has a secret admirer. One of the girls from her history class says a totally hot guy wants to meet her at the 60’s Decade Dance tonight and his name is….Klaus! She’s been compelled so she doesn’t know what he looks like (LIKE ALARIC!) or anything beyond that he wants her to save the last dance for him and that he’s again, totally hot.

After that scare at school, I doubt Elena will be leaving her safe house anytime soon. You’d think she’d be safe but Alaric/Klaus can just walk right in! I guess the vampire rules don’t apply when you’re an original and can possess a human body. Of course, he’s around to hear Bonnie brag about how she can take down anyone or anything that comes at them. Well, now he’s well-versed in their plan! 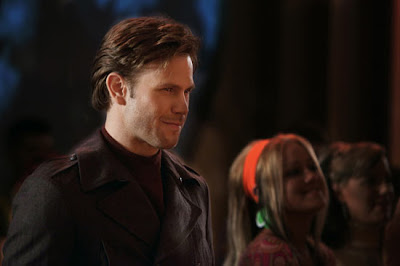 Alaric/Klaus and his warlock minion come up with a plan to take Bonnie out. She’ll be able to sense the warlock coming, but she can’t sense Alaric so he’ll protect him with a spell and they’ll literally “provoke her to death.” Alaric/Klaus will attack until she uses all of the witches’ power and dies before she can even fight against the actual, physical Klaus. While it could work, it sounds like there’s a chance Alaric could die. It’s too bad this wouldn’t kill Klaus, but apparently he’d be safe and Alaric would just end up dead.

Caroline/Matt/Sheriff tension. How can Caroline not sense something is up?! This is making her seem like Season 1 Caroline who was so self-involved she didn’t see the supernatural stuff happening right in front of her. She’s also hardly in this episode, getting shut out of the fights and left out of the planning. Where’s the strong Caroline from the weeks past? I guess we’ll see more of here when the Sheriff finally musters up enough courage to face her vampire daughter.

Jeremy tried to give Bonnie his protective ring, but apparently it won’t work for her. it’s meant to protect against the supernatural, not protect someone who IS supernatural. I really hope Bonnie doesn’t die tonight! Not only do I like her, but I don’t want to see another one of Jeremy’s girlfriends die. That’s a LOT for a 16 year old go through, even in a supernatural, murder-happy town like Mystic Falls. 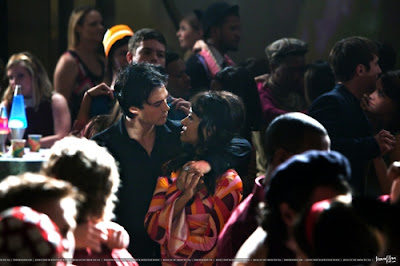 Everything is coming to a head at the dance, with a song dedicated to Elena from Klaus. He picked “Last Kiss” by The Cavaliers, which I was mildly obsessed with earlier this year. Damon isn’t too worried, given that at the last Decade Dance the vampires were everywhere and they came out on top. He also overheard Bonnie/Jeremy’s argument, but Jeremy’s still upset about her chances of survival and left in a huff. Of course Elena and Stefan notice this, leading Stefan and then of course Elena to find out her potential sacrifice. While they’re all confronting Bonnie, Klaus compelled a group of random guys to start a fight with Jeremy, Stefan, and Damon. Then, while they’re all busy, Alaric/Klaus told Bonnie and Elena that Jeremy’s been taken. He seriously could not have picked a better person to possess! I just want him to show his true face already!

Alaric/Klaus leads them away from the party and to an abandoned hallway. After talking about the 20s and laughing at the thought of vervain, it finally clicks that Alaric is Klaus and not just compelled to do his bidding. It’s time to see just what Bonnie can do. There’s some intense breaking of bones, lights exploding, flyers flying off bulletin boards, and just when it looks like Alaric/Klaus might be down for the count, Bonnie convulses and falls to the floor. She can’t be dead, right? Just passed out from the power? But no, Bonnie’s eyes are open, there’s no pulse. I can’t believe they would kill Bonnie off! With no witch, there’s no hope in killing Klaus. Would she have even been able to kill him if he had come in his physical body? She couldn’t kill Alaric/Klaus before the power claimed her life.

This show always keeps me guessing! I thought for sure they wouldn’t go there because she is such an integral part of the show, more so than Vicki was last season. Jeremy took Bonnie’s body back to the spot of all the witches death and with a few lit candles, she’s back! While I hate when supernatural shows do the whole “they’re dead-they’re not dead” thing, I’m so glad she’s still in alive! Klaus had to believe that she died, so she could catch him off guard when he finally does show his true face.

Damon doesn’t mind being the bad guy because tha means he’s making the life or death decisions while Stefan is worrying about collateral damage. He’ll be the one to save Elena’s life. The Damon/Elena shippers must be very happy after this episode. He got to be the hero, and their chat afterwards was fantastic.

“I will always choose you.”

Next week we get the backstory on Klaus and it looks like the Salvatores are butting heads again.

The Vampire Diaries airs Thursdays at 8pm on The CW.