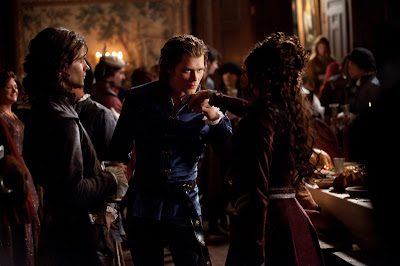 Last we saw Mystic Falls, they were in the thick of all the Klaus villiany goodness. After discovering that Bonnie didn’t actually die, Elena wasn’t about to put her at risk again. She pulled the dagger from Elijah’s chest, essentially bringing him back to life.

This week we dive deep into The Originals’ back stories. His revival takes him back to the moment he met Katherine, the first doppelganger. This episode was full of flashbacks, but they were all so brief, just glimpses in to the past. Let’s take a closer look at them.

Katherine’s first meeting with Klaus: we find out that it’s actually short for Nicklaus and Elijah and him not only originals, but are actually brothers. They were born as humans, but something happened turning them to vampires. Their family is the first and from them all the vampires were created.

“I believe the term you’re searching for is OMG.” 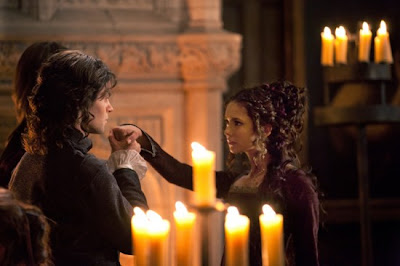 Brothers fell for the same girl: While Klaus is out all night feeding and on young girls, Elijah was there to keep Katherine entertained. Their talk about love was  a nice little moment. You could see his heart soften a bit as she spoke of life only being worth living because of love. How Katherine has changed since her human days!

Elijah tried to find a way to spare Katherine’s life in the process of Klaus breaking the curse. He spoke with the witches and they figured out a way to save her life. But Katherine took it in to her own hands to survive, thus turning herself into a vampire, before Elijah could properly save her. Elena won’t have to make that mistake now that she has all the information. While the conversation didn’t fit with the Katherine we know today, this desire to save herself and distrust in relying on others is her to a tee.

Back in the present, Elijah and Elena reteam to fight Klaus and protect Mystic Falls. Elijah and Elena are going to work together to keep everyone alive, because the thought of Bonnie dying for her is unacceptable. As Elijah’s the only one that knows him, he’s a great guy to have on your side if you can trust him. And Elena thinks she can because he’s a noble man who lives by a certain code. If they can keep to the code, she knows he’ll follow through.

She gets the full story on Klaus, and in return she knows now why he’s turned on his brother. 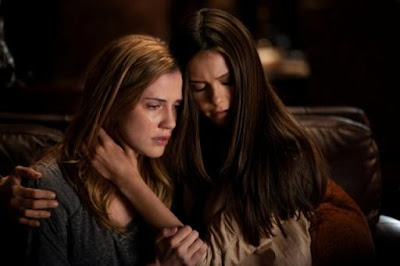 Jenna finally returns from grad school and finally gets to know everything that’s been going on. The scene in the kitchen with her, Alaric, and Stefan was stellar. Klaus/Alaric’s slow build to revealing that vampires are real was chilling, I wasn’t sure where he was going to go with that. I wonder if Stefan was going to be so forthright? Would he have sugarcoated it and tried to keep her in the dark longer?

Jenna’s known the vampire stories since she was a kid, but never thought they were true. Now her world has been turned upside. She’s also the last one to know, which is a doubly worse. She’s supposed to be the one taking care of Elena and Jeremy, but she’s just found out that they’ve been the ones keeping her safe.
The big shocker is that the werewolf/vampire curse is a lie. Elijah and Klaus have been placing clues to the curse since the time of the Aztec. For over 1000 years, they’ve been making up the curse so they’d have an army of werewolves and vampires searching for the moonstone and the doppelganger. But if it’s not to end this curse, what is it for?
The real curse is on Klaus, and he’s been trying to break it for a long time. Klaus’s curse hinges on the fact that he doesn’t have the same father as Elijah. Once his father found out, he sought revenge and killed his biological father and his entire family. This started the war that we know of today, vampires vs. werewolves. But with his birth father being from werewolf blood, what does that make Klaus? He’s part werewolf, part vampire. So far we’ve only seen the vampire side, because while he’s a hybrid, the witches suppressed his werewolf side because nature won’t allow such a powerful being to exist. His werewolf side also means that the dagger doesn’t work on him because it is silver. It only works on the other Originals, like Elijah. The only way to kill him is to have a witch harness enough power, and attack him while he’s at his weakest, during the full moon when he would be mid-transformation. 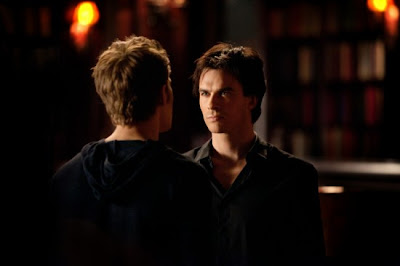 Now that Elena has all the information, she invites Elijah in to her safe house just in time to see the Salvatores at each other throats. Damon and Stefan finally put all the chips on the table. Damon admits that he only keeps Andie around to keep him from going after what he really wants. They’re mid-fight right when Elijah and Elena walk in. Their fight reminds him of his fight with Klaus back in the day. They fought over Katherine, and now the Salvatores are fighting over Elena. Is history is doomed to repeat itself?
Stefan is ready to work with Elijah, but Damon is still upset over Stefan always getting the girl. Andie tried to be there for him as a good girlfriend, but when Damon gets upset he gets rash and impulsive. He rips into her throat, but is able to stop before killing her. He finally has to compel her to leave so he doesn’t kill her. Ian Somerhalder totally sells this.
And in the end, we finally meet the real Klaus. He’s back, in his own body, and ready to kill Elena to make sure he’s the most powerful being to ever exist.
Next week, somebody betrays the plan, putting everyone in danger. Is it Damon and his temper? I guess we’ll see next week!
The Vampire Diaries airs Thursdays on The CW at 8pm.
Tags:televisionvampires
Previous post