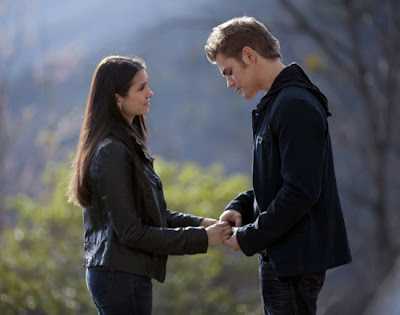 After a 13 hour work day, I don’t have the energy to make this a more cohesive recap. Read through to see my thoughts as I was watching and let me know what you thought of the big twists in the comments!

For the curse to break, he needs a werewolf and a vampire sacrifice and to drink Elena’s (aka the doppleganger) blood until she dies. Elijah has an elixir that may save her life, and Damon has his supernatural ring, but nothing is guaranteed.

Caroline and Matt are still pretending. I’m ready for this storyline to come to a head.

Alaric’s back – funny way to prove it “Jeremy walked in the first time we were together right when I was -” “That’s enough!”

Elena is counting on the age old supernatural show stand by – she’ll die, but come back to life. Gotta admit, there isn’t all that much suspense for me as a viewer because you just know they’re not going to kill off the main character.

OH SNAP – Damon just fed her his blood! She’ll come back alright, but she’ll be a vampire! While this ensures she’ll come back, she’ll definitely be a vampire while the other options she could have returned as her normal human self. Then in the ensuing fight, Damon nearly killed Stefan with a stake through the stomach. Jenna’s handled this incredibly well, having to get blood from the blood reserve downstairs. A weaker woman would have crumbled after being thrust into this situation. She’s definitely related to Elena.

Alaric and Jenna are back on good terms, all it took was for the truth to come out and for Jenna to get her life threatened like the rest of the group!

Tyler is back!! Apparently, against the wishes of the wolf pack. Klaus knew exactly how to lure him back with an injured family member in need.

Caroline and Tyler finally have a face-to-face and it just comes off as Caroline jealous of Jules. I wasn’t expecting that, since as far as she knows she and Matt are perfectly happy! Of course, their chat was interrupted by Klaus’s witch, taking them off to be the sacrifice.

Klaus, in the flesh, finally shows himself to Damon. Far fetched he’s go for it, but gotta give Damon props for asking him to postpone it one more month. Of course, he won’t go for it, but Damon’s gonna try to take the werewolf out the equation so he can’t fulfill the prophecy tonight.

Does Caroline know the full story of Klaus and the curse? It certainly seems so with that look of realization upon Tyler’s question of “Who’s Klaus?”

Klaus is so evilly genius. At the suspicion that Katherine’s been taking vervain, he compels her to stand in the sun. She does to prove that she’s still under control, which takes some serious guts. 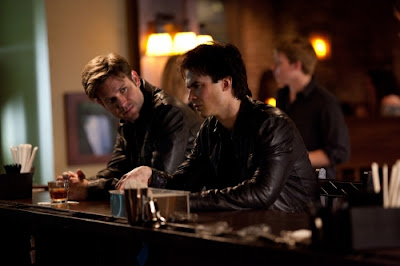 MATT HAS PICKED THE RIGHT SIDE! He followed Damon and shot the warlock, thereby giving Damon the chance to snap his neck. Oh, whoops, Matt still isn’t fully on his side, thinking Damon’s the one holding Caroline hostage. Instead of explaining, Damon knocks him out to keep him out of the way.

“You’re lucky I already screwed up once today, otherwise you’d be dead.”

Caroline and Tyler are having the heart to heart they needed to have after she was held hostage by the werewolves. He thought she hated him this whole time? Stupid boy, one mistake does not undo and entire friendship! It was a big mistake, but still, only one.

After climbing the mountain, Stefan and Elena finally have their talk about her impending vampirism. He’s selfishly glad that they can now spend forever together, but Elena is already mourning the humanity she’s going to miss out on. She won’t have a family, get to grow old, make the tough life choices, etc. Didn’t she want to be a vampire in the book? I didn’t read them, but I remember hearing that was one of the similarities to TWILIGHT.

Elena’s ready to die/become a vampire for the sacrifice, so no one else gets hurt. But Damon may have done the hard work and forced a delay by releasing Caroline and Tyler. But this is Klaus, he’s got to have like Jules and Katherine waiting in the wings for this right? YEP, exactly as I thought. Damon goes to confront Klaus and he’s got a live feed of Jules changing in a dungeon. Now the question is if Katherine or Damon will be his backup vampire sacrifice.

Apparently the backup which is Luka’s sister; of course all the witches are related!

OH SHIT – the biggest twist of the night is that instead of using one of the vampires at his disposal, he turned Jenna just so she could be sacrificed. Why not Damon? SECOND BIGGEST TWIST OF THE NIGHT – Damon got bit by Tyler in their scuffle. How is he going to survive this?!

Next week, the sacrifice takes place. Will it work? Will anyone survive?!