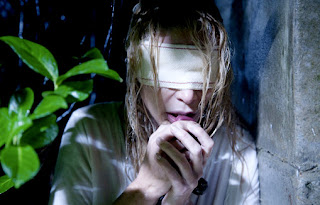 Almost from out of nowhere, Spain has become one of the leading countries in horror cinema. The county, in the last ten years, has given the genre such modern classics as REC, The Orphanage and The Devil’s Backbone. Now, there’s another film to add to that impressive resumé: the Guillermo Del Toro produced Julia’s Eyes.
Director: Guillem Morales
Year: 2010/11

The film begins with the suicide of an adult woman, Sara, who decides to hang herself after constant terrorization from an unknown assailant. The police believe that Sara simply hung herself after being unable to cope with her blindness, but Sara’s twin sister, Julia, who is in the process of losing her vision, thinks otherwise and decides to investigate the death further. This, however, is an act that the aforementioned unknown assailant didn’t expect and, therefore, he decides to cover up the evidence before Julia can find it. Even if it means killing her too.

Director Guillem Morales takes what could have potentially been a middle-of-the-road horror with Julia’s Eyes and makes it into something that is thrilling, chilling and genuinely exciting. Right from the film’s aforementioned opening scene, he sucks you into the story with the force of a tornado and keeps you restrained there for entire two hours of its running length. Its grip only loosens when the film finally fades to black and the credits begin to roll.

Furthermore, though the film is rather long, especially for a genre of cinema that usually doesn’t go much over the 90 minute mark, Julia’s Eyes unfolds at a rip-roaring pace in which the twists and turns come so fast that almost every scene sweeps you into a new territory of its mystery. Nevertheless, despite the rapidity of the narrative, Morales’ movie, surprisingly, never feels rushed as each character is well developed, every scene is brilliantly set and the film’s gothic tone is stunningly conducted.

The build-up suspense, moreover, is so brilliantly done that you wouldn’t be wrong for thinking that Alfred Hitchcock has risen from the grave and is now working under the alias of Guillem Morales. The fact that whenever Julia is left on her own your heart stops, fearing that whoever is trying to kill her could possibly strike now that she is at her most vulnerable, speaks volumes about how effective Morales’ work is here.

However, half way through the film, Julia, frightened of losing her husband and her quality of life if her vision were to disintegrate, decides to undergo a procedure to save her eyesight. Following the successful operation, she is forced to wear a bandage over her eyes for two weeks in order to protect her newly healed eyes from brightness and infection. And it’s at this moment that Morales’ handling of suspension goes from being effective to masterful.

In an attempt to put you in the shoes of Julia during these two weeks, the cinematography is carefully arranged so that faces are hidden from the viewer as they are from Julia, sounds are amplified to give the effect of certain senses being sharper with the loss of vision, and the lighting is superbly calibrated so that locations are shrouded in the same darkness that she would be experiencing. Therefore, in the scenes when Julia’s safety is threatened, for example, the villain is only present through sounds and occasional background flickers. These creative decisions ramp Julia’s Eyes’ suspense from nerve shattering to full on shaking-in-your-seat terror as it truly plays on your fear of both the darkness and the unknown.

In some ways, Julia’s character, throughout this situation, turns a mirror on the horror genre itself. The aforementioned fear of the darkness and the unknown is something that every good horror director who wishes to instill terror into their audience knows, and here Julia’s blindness embodies that fear. She, like us, wants to know what is in the dark and yet her impairment distances us from what’s hiding there in the same way that the filmmaker shrouds us through editing, lighting and cinematography.

Though it has its horror conventions, Julia’s Eyes is, however, far more than just a compilation of scares, jumps and suspension. It also has a great mystery that anchors the plot and, at a somewhat extensive running time of two hours, keeps you glued to the screen from start to finish.

It cleverly offers a large ensemble of questionable characters and potential suspects so that, as the film develops, you’re right alongside Julia trying to piece together the evidence she has already gathered on the death of her sister and figure out who may have killed her and why. Again, this is an example of Morales making the normally objective experience of film viewing and making it into something subjective.

Furthermore, though the plot is rich in characters and has more twists are turns that a slalom slope, each one of the aforementioned characters is as psychologically complex as the next whether it be Julia’s suffering husband coming to terms with the inevitable, the similarly afflicted lonely neighbor who consoled Julia’s sister through her loss of vision after her son abandoned her when she most needed him or even Julia herself who’s fear of also losing her vision gives the film a surprisingly powerful emotional subtext.

Embodying the spirit of Alfred Hitchcock and delivering a film that an exciting mystery ride, a chilling work of suspense, a stylish tour-de-force and a fascinating character drama, Julia’s Eyes is another tremendous work of Spanish horror and is, in turn, the best film that the genre has given us thus far in 2011.

A Who's Who Guide To X Men First Class