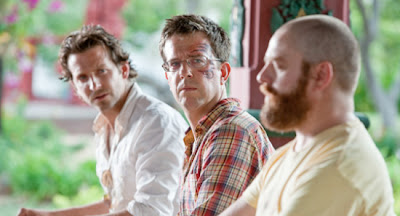 Was there really any surprise? I mean really? THE HANGOVER PART II and the Wolfpack doesn’t fail to impress viewers as well as at the Box Office. The weekend was very kind to our trio of mischief makers. $86,480,000 was the number that they were able to navigate out of peoples wallets these last couple of days. That’s not counting the money that it made being released earlier in the week. Altogether, the comedy made a staggering $118,090,000 this past week. Its opening weekend total puts it in second for most made in a debut this year. Only PIRATES OF THE CARIBBEAN: ON STRANGER TIDES is above it and it pushes FAST FIVE into third place in that category.

This week will pit yet another much anticipated summer release against the already established juggernauts. X-MEN: FIRST CLASS comes out this Friday and will no doubt bring some serious competition to the playing field. The summer of movies is just getting started.

A Who's Who Guide To X Men First Class

Marvel Expands With a Little Help From Deadpool And Thor

First VACATION Trailer Stands on Its Own