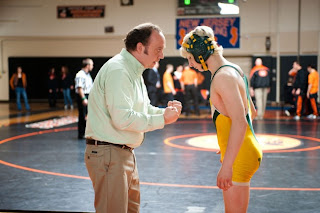 Actor turned writer and director Tom McCarthy is one of those people whose face you will probably recognize, yet whose name you do not know. In front of the camera, he’s had minor roles in everything from Good Night And Good Luck and The Wire to Little Fockers and The Lovely Bones playing an incredible variety of characters. However, though you may recognize him from his acting career, the director’s chair is where McCarthy excels. Back in 2003, he broke through out of nowhere with the heartwarming The Station Agent and, some four years later, built on that success with the Oscar nominated The Visitor. Now, another four years have gone by and Tom McCarthy returns to what he does best with another gem: Win Win.

Director: Tom McCarthy
Year: 2011
Continuing his theme of characters who find a life-altering friendship in the most unlikely of places, this film tells the story of a lawyer and unsuccessful high school wrestling coach, Mike, who dishonestly evicts an elderly man. However, things take a turn for the complicated when the man’s grandson, Kyle, shows up having run away from home. Mike houses the boy out of guilt and soon realizes that Kyle was once an up-and-coming name in the high school wrestling field.

Though Win Win does push all the typical buttons that independent American dramas have done before, blending the themes of coming-of-age and mid-life crisis with a sprinkle of off-beat comedy, McCarthy once again showcases that he does it better than anyone else in his field. Like always, the New Jersey born filmmaker has a wonderful ability to create characters that are staggeringly human. There isn’t a single prominent character in any of his films that an audience member couldn’t relate to in some way; each one has their strengths and their weaknesses and have so many different layers to their personality that they almost feel real. Sometimes, like in the case of Win Win, that even extends to many of the supporting cast. For example, a Star Wars obsessed friend of Kyle’s from wrestling may begin as a simple tool for comic relief, but by the last act comes out of his shell as a fully-rounded character who’s been given the self-belief to achieve though his companionship with the boy.

McCarthy’s approach to his characters is also refreshingly optimistic. While other less talented people may have villainized a character like Kyle’s drug-afflicted mother when she turns up half way though the movie, the writer and director instead sees the good in every one of his creations and makes her path through this film one of acceptance and tragedy. This optimism shines through, moreover, in the film’s bright color pallet where green, yellow and blue illuminate every sequence.

Furthermore, while most movies rely on a powerful musical score or grand, larger-than-life gestures from its actors to make a scene moving, Tom McCarthy has a unique talent for being able to achieve this with a subtle ease. In many cases, Win Win’s most stirring moments, rather than being sentimental and dramatic, blossom from ordinary, realistic moments in which little is said or done. A great example of this comes towards the film’s final act when Kyle’s forgiveness of some of Mike’s acts comes not through some tearful monologue, but instead a simple gesture of sitting at the dinner table and tucking into one of the family’s home-cooked meals.

Paul Giamatti, who is pretty much flawless as an actor, continues his streak of greatness as Mike Flaherty. Knocking it out of the park with ease, he embodies his character with a comfortableness and confidence that deserves more recognition than he’ll probably receive. Amy Ryan, on the other hand, feels a bit misguided in her role as Jackie altering disjointedly between a middle-class, conservative mother and a fun-loving, youthful girl trapped in an adult body. Nevertheless, when she’s asked to shine, Ryan doesn’t disappoint and nails some of Win Win’s big moments.

Win Win is visual evidence that a film doesn’t have to be pushing boundaries or walking in uncharted territory to stand out from the crowd. As long as you have a talented writer, director and a staggering ensemble of actors, even the most simple of stories can become memorable.