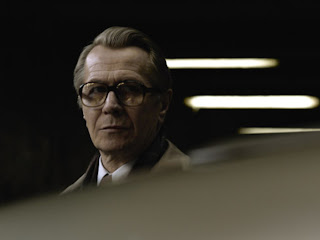 Typical. You wait all summer for a great trailer and two come along at once. Yesterday, we were able to give you the first glimpse into Steven Spielberg’s new drama War Horse, which is one of my most anticipated releases of the year. Now, today, we’re pleased to bring you the teaser trailer Tinker, Tailor, Soldier, Spy which may actually be my number one most anticipated release now that The Tree Of Life is out of the way! The superb trailer only heightens my excitement and you can see why below.

Based on the acclaimed BBC television series, the film tells the story of a mole in the British Secret Service during the height of the Cold War. Taking on the role that Alec Guinness portrayed on TV is Gary Oldman and he is joined by a cast that also includes last year’s Oscar winner Colin Firth, upcoming star Tom Hardy and Mark Strong, Benedict Cumberbatch, Ciarán Hinds, Toby Jones, John Hurt and Stephen Graham too!
Oh, and there’s an also icing to this delicious cake: Remember that brilliant Swedish horror film Let The Right One In? Well, this is the director Tomas Alfredson’s follow up to that sensational movie!
Check out the trailer below:
Source: The Guardian
Tags:Tinker Tailer Solider SpyTom Hardy
Previous post