SDCC: Who Will Win The Ultimate Battle? Vampires vs Zombies! 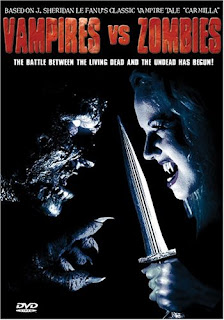 Ultimate Warrior is one of those shows that in theory I should love. Its got crazy tests, heated battles, famous figures, all of that, yet I’ve never been able to get into it. However, when I found out they were doing a panel called: Deadliest Warrior Zombies Vs Vampires, I simply couldn’t pass it up. While they didn’t show the whole episode like I was hoping, it was still an awesome hour of entertainment.

They started out by bringing on the hosts of the show in addition to the people calling the shots. They all looked like a great group of guys who treated their jobs like being kids in a candy store, which was very refreshing. Going into the panel, I tweeted that my heart was with zombies, but my mind was with vampires. After the information that the panel presented, I think that my mind was correct.
They showed a couple of scenes, the most interesting of which was three “strong men” who were blind folded and told to rip open a prosthetic body to see how long it would take them to get to the heart. After ripping through artificial flesh and bone, and spewing blood all over the camera, it took the men 58 seconds to get to the heart, which would equal the killing of one vampire.
They spent much of the panel discussing the rules of the scenario, and they did state that by their calculations, it would take a hoard of 63 zombies to take out 1 vampires: your classic battle of quantity vs quality.
Well that is just a brief look into all the fun that was had at the panel. If you would like to watch the whole panel, you can watch it here.
Be sure to tune into the season 3 finale, as the ultimate winner will be decided. Again, I think it will be the vamps, but I’m pulling for the zombs. Thanks for reading!
Tags:Deadliest WarriorSDCC2011Spike TVtelevisionvampireszombies
Previous post

SDCC: Friday Panel Recap, including everything from THE RAVEN to THE AMAZING SPIDER-MAN

SDCC: Who Will Win The Ultimate Battle? Vampires vs Zombies!