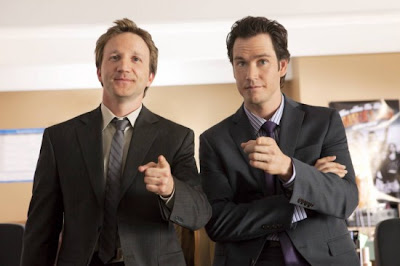 The success of TNT’s FRANKLIN & BASH has prompted the network to pick up the series for a second season. It airs currently on Wednesday nights at 9 pm. Mark-Paul Gosselaar and Breckin Meyer will be back again next year to hopefully recreate the success that the show has had thus far. It is one of basic cable’s top new series of the summer. Created by Kevin Falls and Bill Chais, Franklin & Bash is produced by Four Sycamore Productions, Left Coast Productions and FanFare Productions in association with Sony Pictures Television, with Falls, Chais, Jaime Tarses and Jason Ensler serving as executive producers. TNT has ordered 10 episodes for the second season.

“This summer, Franklin & Bash has broken out as a hugely entertaining series with great characters, sharp writing and a terrific cast,” said Michael Wright, executive vice president, head of programming, for TNT, TBS and Turner Classic Movies. “We’re thrilled that the show has drawn such a remarkably strong following and look forward to bringing it back next summer.”

The show has earned itself 3.9 million viewers in Live + 7, ranking it among basic cable’s Top 5 new series for the summer-to-date since its premiere June 7th. The series is averaging an outstanding 1.8 million adults 18-49 and adults 25-54. Franklin & Bash scores a significant number of viewers through time-shifted viewing, including a boost of well over 50% among key adult demos.