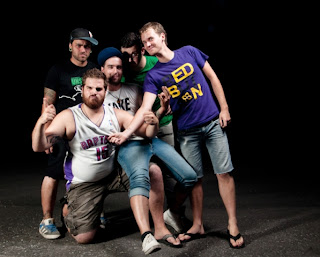 Toronto-based post-hardcore band Dancing With Paris is set to self-release
their debut full-length on September 20th, 2011. Titled “The Drought”, the
album is 12 songs of heavy riffs, powerful breakdowns, catchy hooks and
strong vocals. The first single off the album, “Plurals” was launched by
the band themselves and is available for free here! The second single, “Brazen Bull”, was released earlier this week and
streamedon the websites for Metal Underground and BW&BK Magazine.

Over the past two years, Dancing With Paris has been making their mark in the Canadian metal and hardcore scene. Their energetic live shows, down-to-earth mentality, and dedication to their ever-expanding fan base truly set them apart from other bands in the genre. During the past year, Dancing With Paris played over 85 shows across Canada, including four tours and appearances at multiple festivals and showcases. In the course of this they appeared with multiple giants of the current hardcore and metal scene including Vanna, A Plea for Purging, We Came As Romans, and Abandon All Ships.

The Drought was recorded this past winter, thanks to a FACTOR grant from the Canadian Government. After locking themselves away for months to write and record the new album, Dancing With Paris are ready to hit the ground running. They are continuing on their Ontario weekend stints leading up to the album release. The Drought is a monster of a release that everyone can enjoy, and Dancing With Paris are ready and excited to bring their heavy dance party to fans everywhere.

Worst movie posters of the year so far

Jessi was born and raised in Chicago, but she left her heart in NYC. She has been to more concerts than days of school, but somehow still made her way to university. Her idea of fun is an evening of karaoke to the worst songs of the '90s while a lit cigarette lies burning in the corner. She used to refer to herself as an "aspiring music journalist" but one day, she just woke up and decided she was one. That being said, she's always writing and always hungry for more. Anything of the 'rock' persuasion gets her motor running, ya dig? Follow her on Tumblr - http://hottrampinthecity.tumblr.com