Smurfs sequel to arrive in 2013 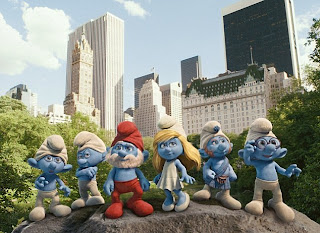 Hooray film fans! It’s the news you have all been waiting for! The Smurfs will be back on our big screens in 2013 for a sequel to this summer’s smash hit.

A release date has already been penned after the huge opening weekend it had at the box office. It’ll come out on August 2nd 2013.

As of right now, producer Jordan Kerner is the only person attached to the project, but it’s expected that all the voice cast will return.

Who wants to take the first stab at the inevitable unfunny in-joke of a title it’ll have? I’m thinking Smurfs 2: Back In Blue. It’s an AC/DC reference, it links in to The Smurfs and it rhymes too!

If it does actually come off, you heard it here first, guys!
Tags:The Smurfs
Previous post

Matt Damon photos from the set of Neil Blomkamp's ELYSIUM

Worst movie posters of the year so far

New Image And Teaser Trailer For THE SMURFS

Smurfs sequel to arrive in 2013