Billboard features Mat Kearney in light of Young Love success & as nationwide headlining tour gets ready to kick-off! Check out this article in current issue of Billboard, on newsstands now. 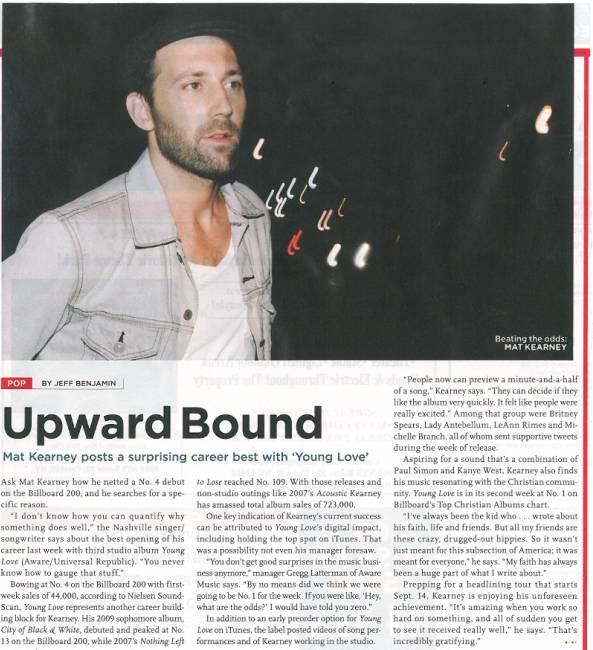 “Mat Kearney gives us a “surprising career best” with his latest album Young Love“, says Billboard. Young Love burned up the charts and jumped to #1 on the iTunes Overall Album Charts (holding strong in the top spot for a week straight), as well as landing on the Billboard 200 at #4. Mat Kearney sat down with Billboard to talk about the overwhelming reception the album has gotten so far.

Hot on the heels of the amazing success of the album, Mat Kearney is kicking off his nationwide headlining tour that starts in Jacksonville,FL on September 14th! Be sure to check out the confirmed dates for this tour on Mat’s official website!

Jessi was born and raised in Chicago, but she left her heart in NYC. She has been to more concerts than days of school, but somehow still made her way to university. Her idea of fun is an evening of karaoke to the worst songs of the '90s while a lit cigarette lies burning in the corner. She used to refer to herself as an "aspiring music journalist" but one day, she just woke up and decided she was one. That being said, she's always writing and always hungry for more. Anything of the 'rock' persuasion gets her motor running, ya dig? Follow her on Tumblr - http://hottrampinthecity.tumblr.com